Treatment of intracapsular hip fractures (not sliding hip screws or intramedullary nails) inregards to patients who require some form of arthroplasty for their hip.  Be that a hemiarthroplasty or a total hip replacement. The objectives are to examine the guidelines around hip fracture treatment, understand the role of cement in the treatment of femoral neck fractures, to study the safety or not of cement and to learn the technique of cementing in hip fracture patients.

My name is Ross Crawford.  I’m an orthopaedic surgeon in Brisbane, Australia.

I have had a long term interest in the management of hip arthritis and the fixation and treatment of fractured neck of femurs.  I also have an academic role at the Queensland University of Technology.

Today we are going to talk to you about the treatment of intracapsular hip fractures.  We are not going to discuss sliding hip screws or intramedullary nails we are just going to talk about patients who require some form of arthroplasty for their hip.  Be that a hemiarthroplasty or a total hip replacement. The objectives are to examine the guidelines around hip fracture treatment, understand the role of cement in the treatment of femoral neck fractures, to study the safety or not of cement and to learn the technique of cementing in hip fracture patients.

Firstly we will run through some guidelines from America and the UK, we will look at some trends and outcomes from the Australian National Joint Replacement Registry, we will look at mortality and fixation around the world, then I will explain to you how we cement differently in a hip fracture to a primary total hip.

If we start with the guidelines, it is of note that the American Academy of Orthopaedic Surgeons actually strongly recommend the use of cemented fixation in elderly hip fractures and that is becoming an internationally recognised guideline.  There is no national guideline anywhere in the world that does not support the use of cement with a stem in a hip fracture.

In the United Kingdom, the NICE guidelines have long been held as a gold standard and they have very clear guidelines about how you should manage a hip fracture patient.  You want them to be in the theatre the day of admission or the next day.  You should have a dedicated list, you should have daily orthogeriatric input, the patient should be mobilising fully weightbearing the day of or the day after surgery and your hip fracture unit should take care of the patient through the whole journey.

The guidelines recommend using a proven femoral stem rather than an Austin-Moore or a Thompson’s and you must use a cemented implant in patients undergoing surgery with arthroplasty and it is of note in the United Kingdom if you do not use cement on the femoral side the hospital does not get paid.  The guidelines are that strict. 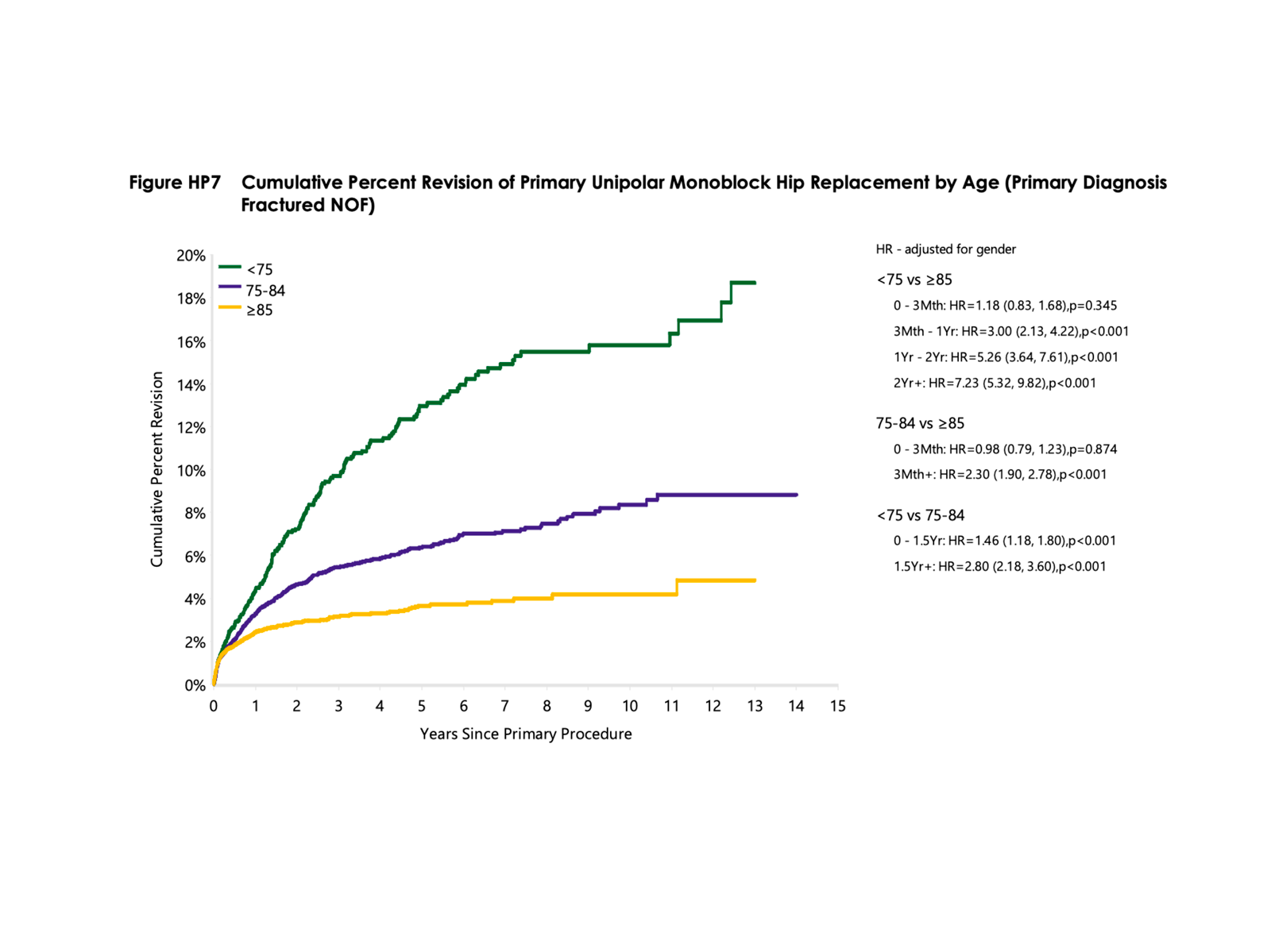 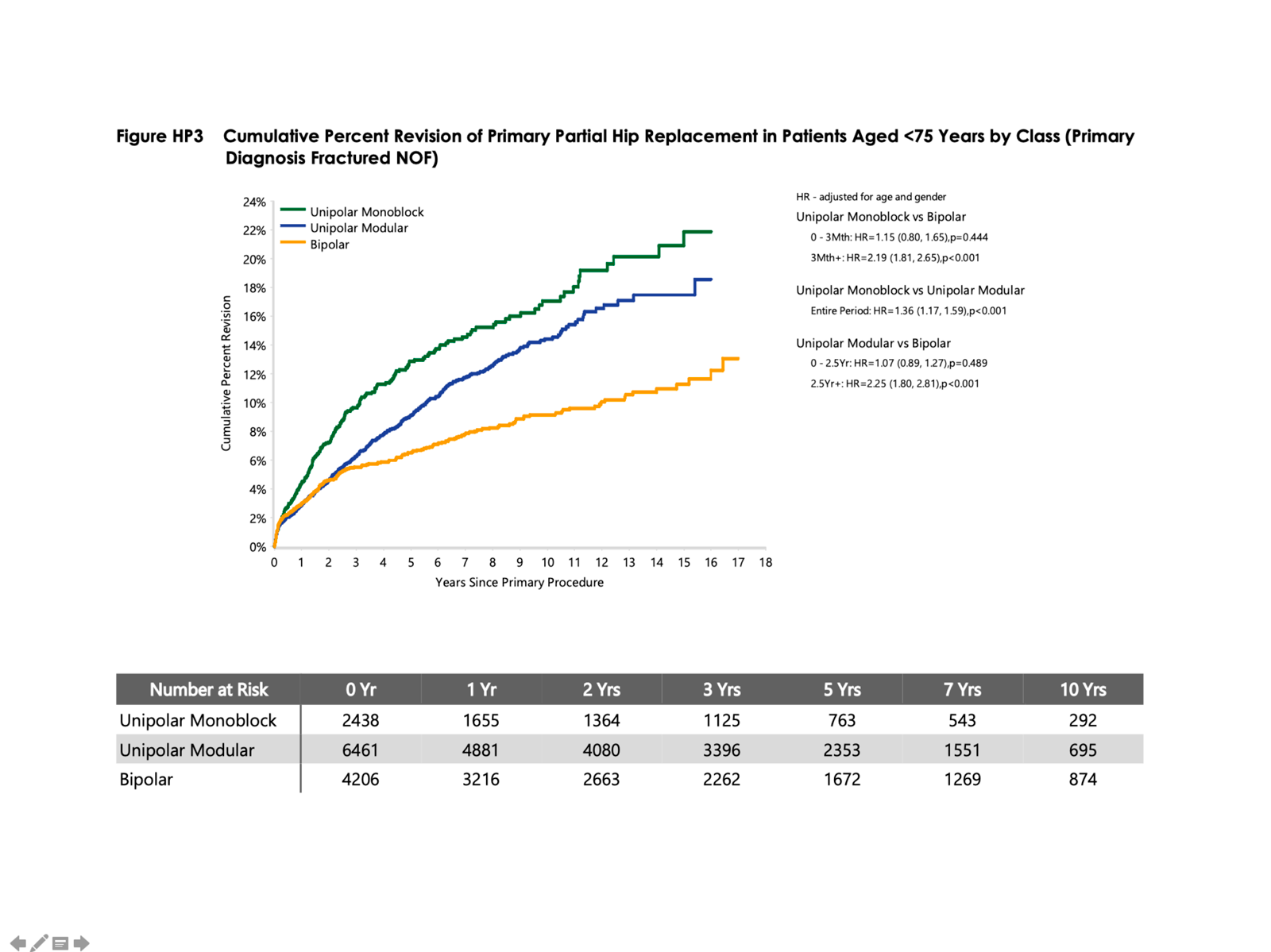 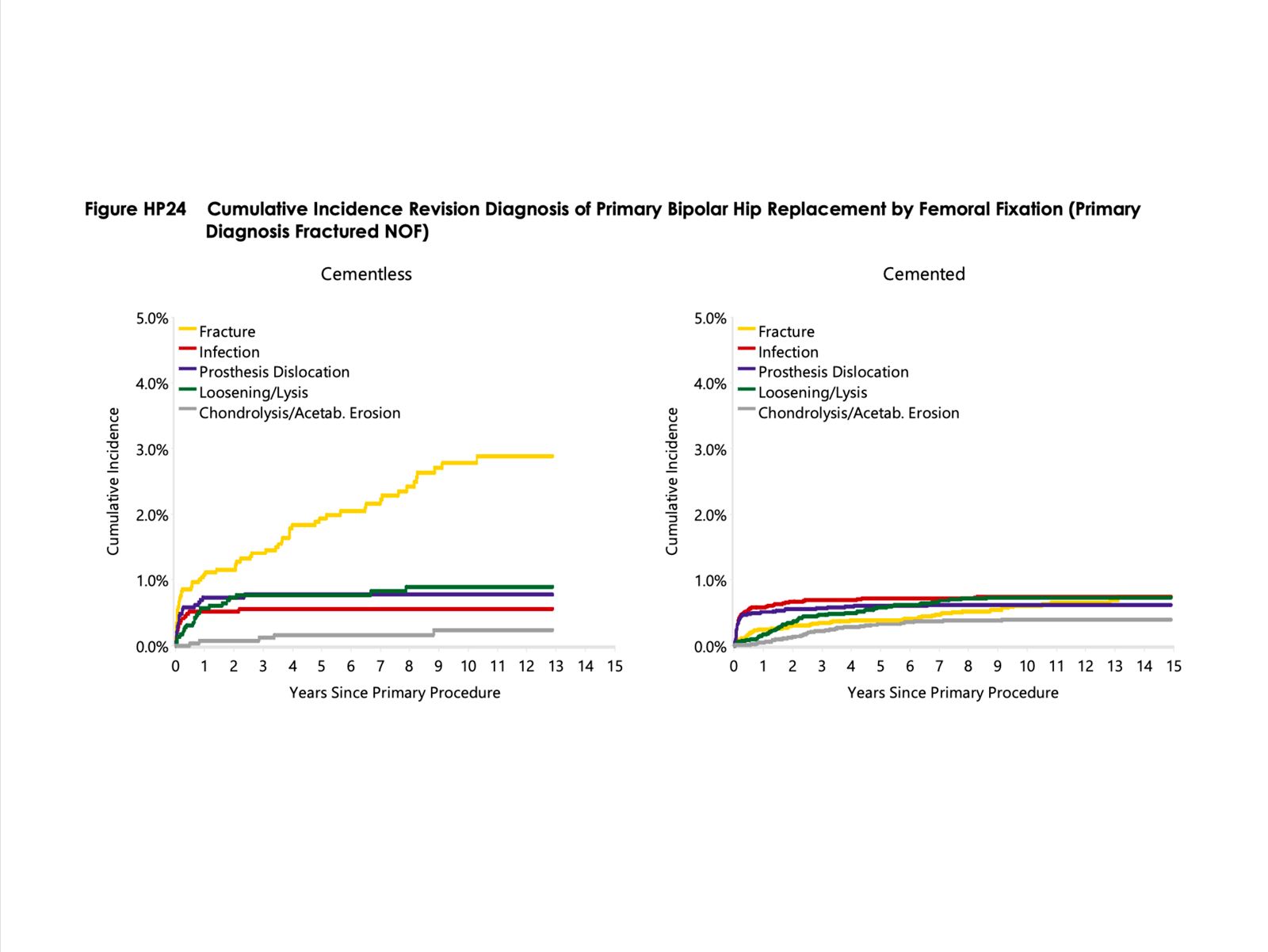 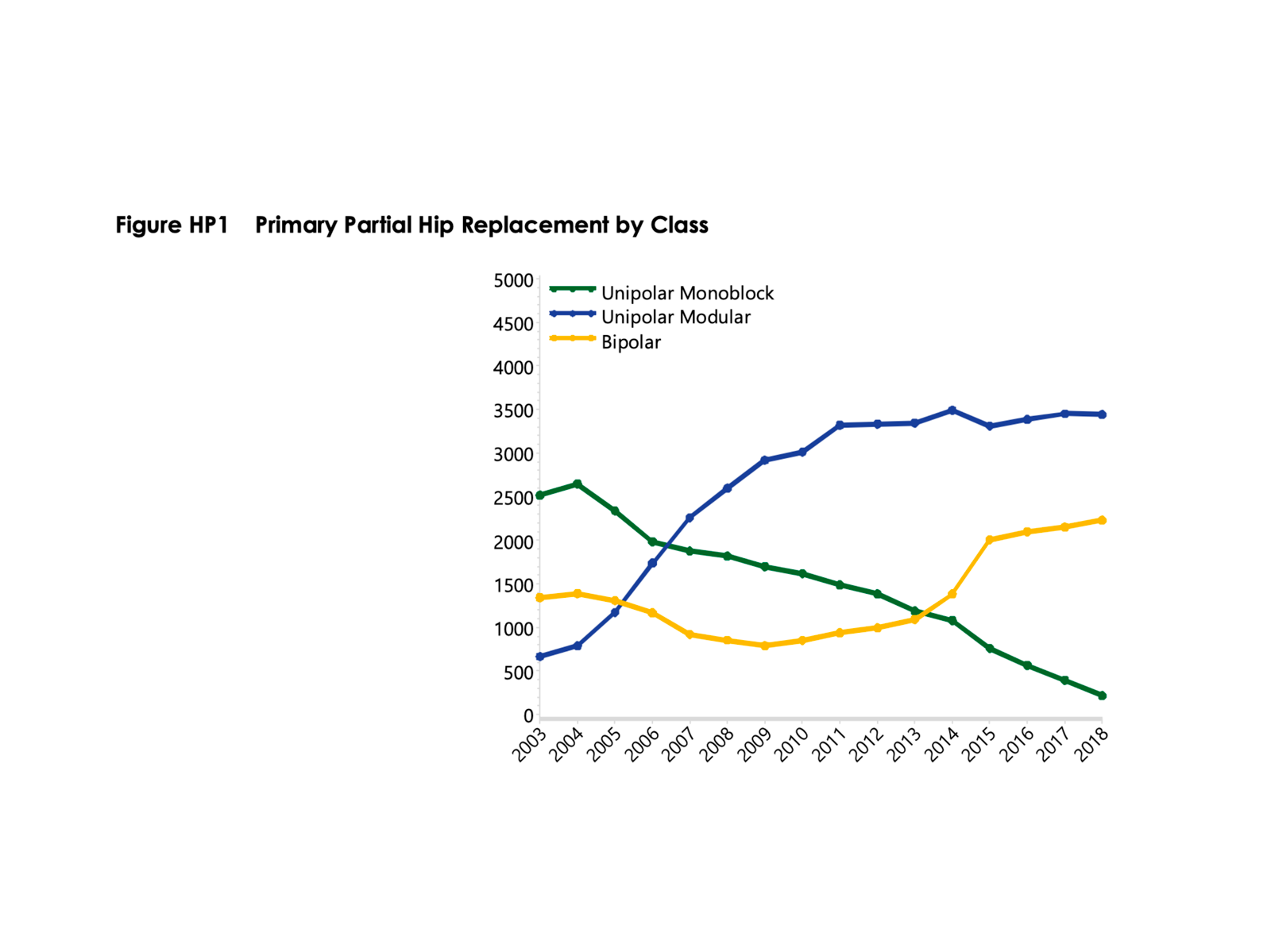 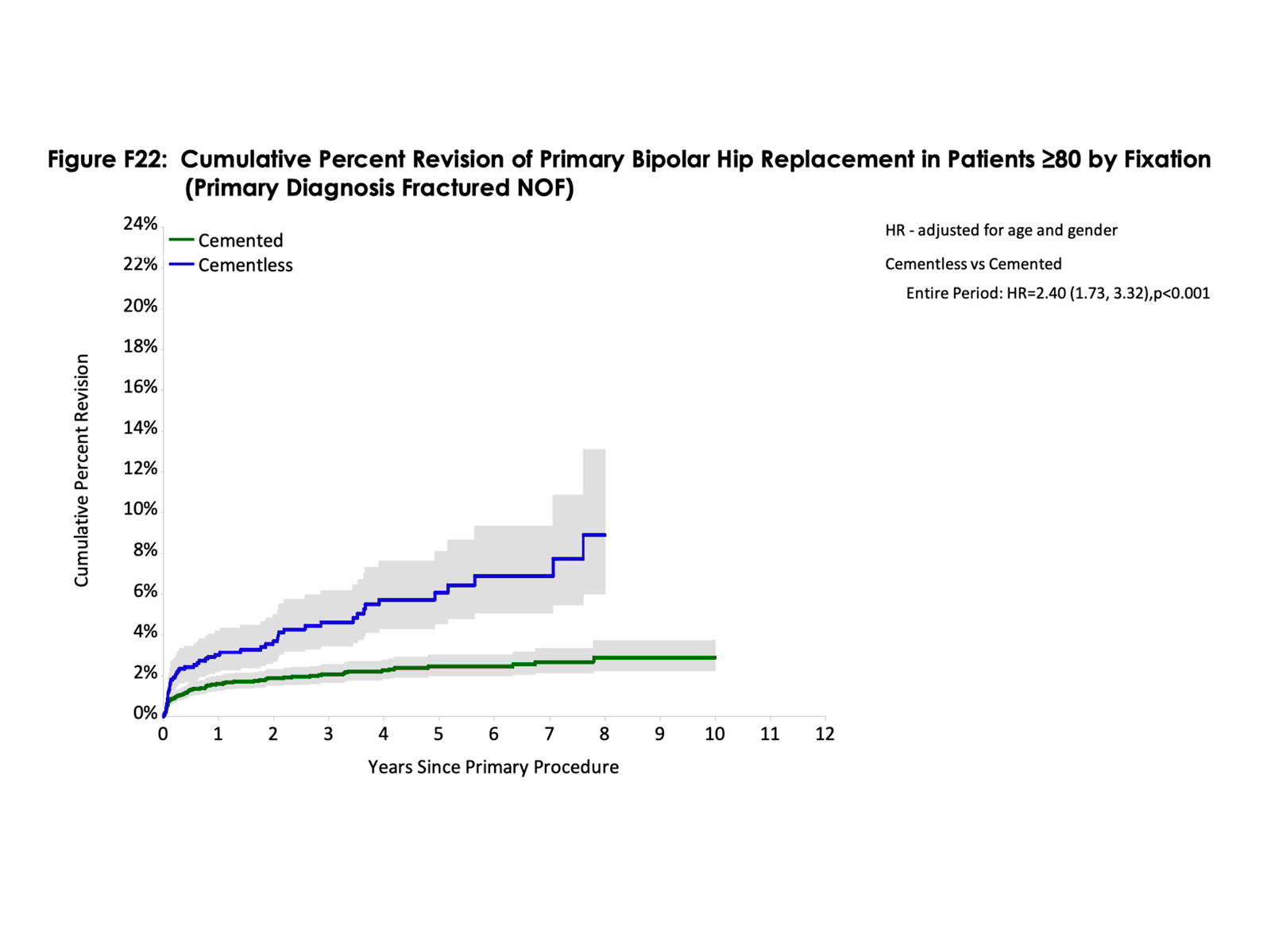 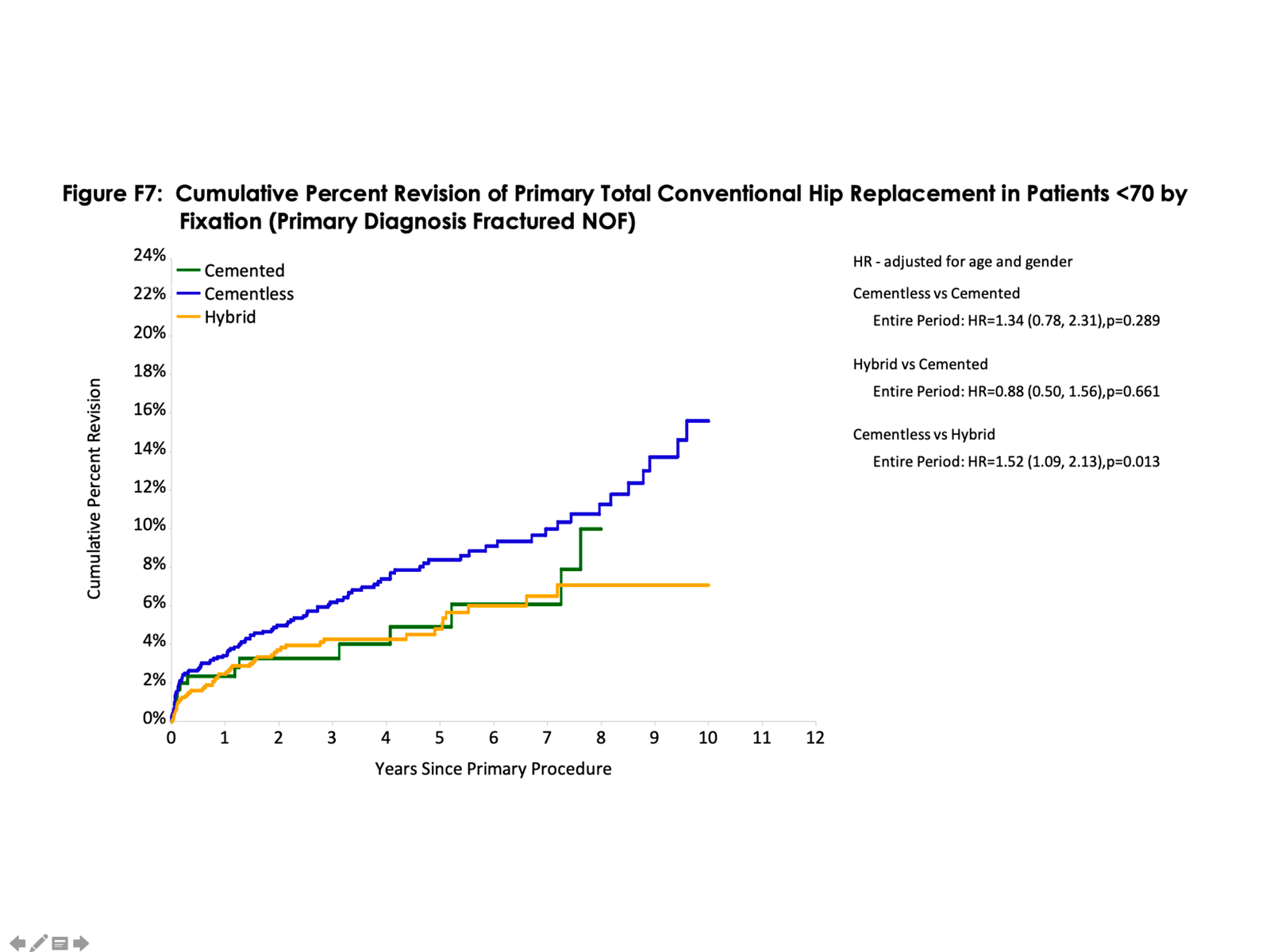 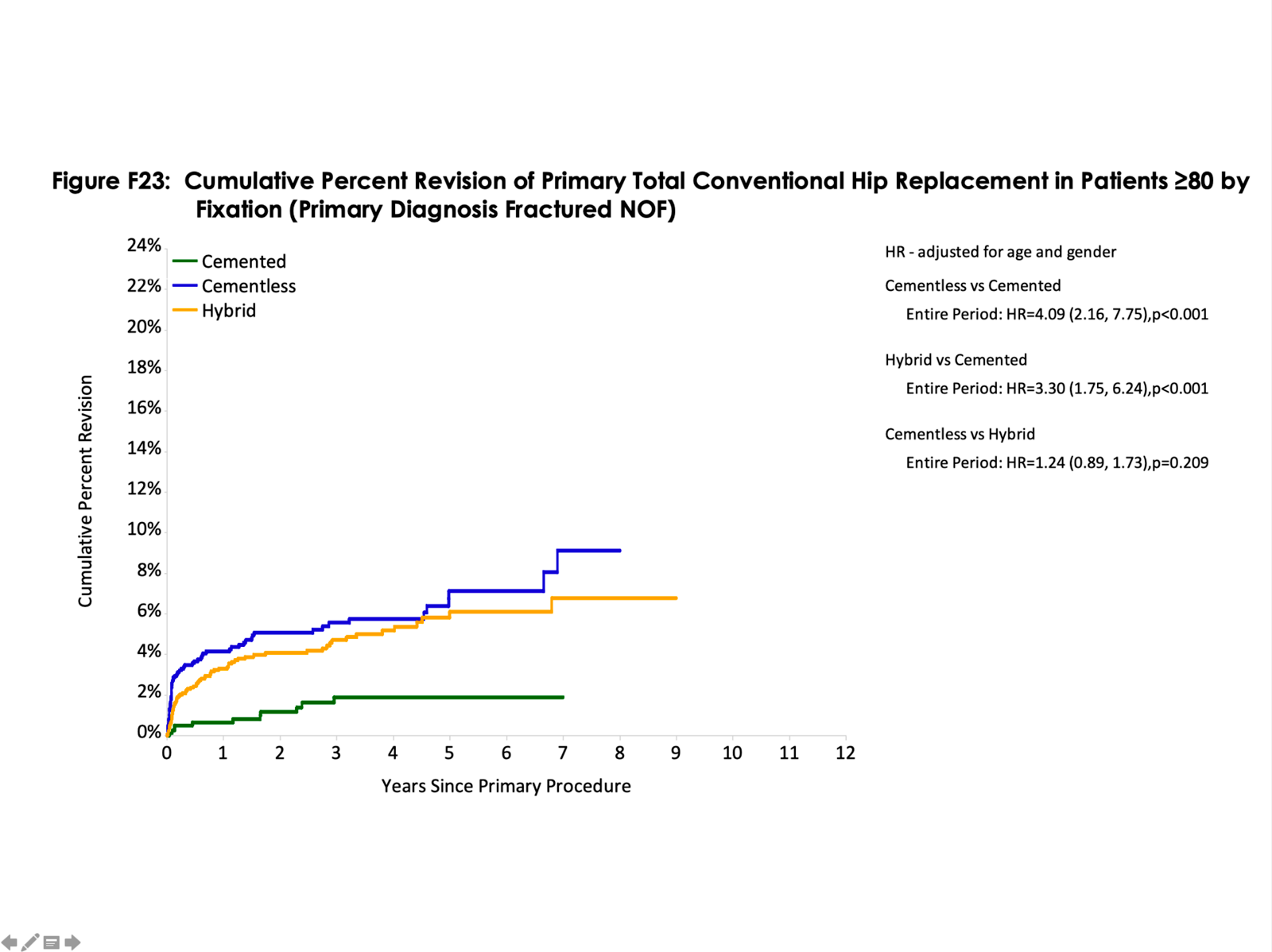 What do the results show:  The results show that a bipolar implant does better than a unipolar or a unipolar modular if you are going to treat with the hemiarthroplasty.  The difference is not great in the elderly but in the young it is very clear that you should use some form of cemented bipolar implant rather than a monoblock implant and these differences become even more dramatic with age and so the patients under 85 should probably have a bipolar rather than a unipolar and that is becoming increasingly recognised and we have seen in Australia that the use of unipolar implants is pretty well falling by the by.

The question then is how do you fix the bipolar implant and the differences are incredibly dramatic when you start to look elderly patients receiving cemented versus uncemented implants.

The same is true with cemented hip replacements.  The evidence is increasingly clear that the cementless total hip replacements do significantly worse than the hybrid or the cemented and over 80 we probably should be using cement on both the acetabular and the femoral side.

Recently, publications from the United States have come in and supported this and a large registry analysis written by Brian Springer et al actually found that there is a very high incidence of periprosthetic fracture when you use an uncemented implant and we are just starting to see the beginning of a trend and a big swing in the United States towards cementing stems in hip fractures in the elderly.

In Australia in hip fractures 4% of stems are uncemented.  In the United States 93% of stems are cementless.  We have done some economic modelling and if we actually changed to doing what we do in Australia they would save their healthcare system many billions of dollars overnight and they would save countless lives.  Fortunately we are starting to see this change coming into play.

The data as I said is starting to come out of the United States and there is a paper in JAMA from this year 2020 looking at just over 12,000 fractured neck of femurs.  Pretty much 50/50 cemented and uncemented and the one year revision rate for cemented was 1.3 and for cementless was 3.0 and if you do the Maths on the number of hip fractures treated in the United States that is an excess of 25,500 revision per year in the United States based on the decision to not use cemented total hip replacements and that is becoming increasingly unacceptable and difficult to defend.  In this study there was no difference in mortality at any stage.

So you should use a bipolar in younger patients if you are going to use a hemiarthroplasty, cement in everybody, use a good quality stem and the role of total hip is becoming a little bit clearer but still not fully defined.

So the debate is kind of lost on fixation, the uncemented people cannot defend the use of their implants with the Registry results.  So what has happened they have tried to bring in this lateral argument about mortality and created this myth that cement is not safe.  In the next few minutes we are going to actually address that issue and bust that myth.

So bone cement implant syndrome is a rare yet devastating condition.  You see systemic hypertension, hypoxia, pulmonary hypertension, cardiac arrhythmias, and very occasionally cardiac arrest and death.  That probably occurs in a number of patients on the table even up to 20% in its mildest forms but it happens in uncemented and cemented probably in quite equal numbers.

We published way back in 2011 on 25,500 hemiarthroplasties from the Australia Hip Registry.  We showed a slightly increased mortality on day 1 when you use a cemented implant, this had reversed by one week and persisted at month and by one year you were 50% more likely to have died if you have had a cementless than a cemented stem.  That is 20.7% versus 29.6%.  So if you were choosing a cementless stem you are killing 10 in 100 patients based on that data.

In Finland they looked at 25,000 patients, similar numbers in 2014.  They actually found no difference in mortality at one week or one year but importantly cement was not implicated in increased mortality and like every other study they showed increased mechanical complications, femoral fractures and re-operations in a cementless group.

Another study more recently in 2019 in Finland, 10,500 patients single institution, no differences in morality between fixation groups.  All the complications were related to medical code morbidities and not bone cement implantation syndrome.

In Canada, again 2020, they showed increased mortality with the use of cementless fixation for fractured neck of femur.  In fact their number almost completely mirrored our Registry number.  At smaller numbers just around 6,000 no difference in mortality at 0,1 or 7 days and again at 1 year there was 10% lower mortality in the cemented group  So again they showed you are killing 10 in 100 patients by a year if you choose an uncemented stem.

So if we look at the evidence around cement it is actually safe.  It is actually protective against mortality in nearly every study and in no study that has been properly matched with patient characteristics does cement does cause an increased risk of mortality.

You may very rarely see a bone cement implant syndrome but if you are aware of it and I will show you in the next few minutes what we do to prevent this complication.

So how do we cement in a hip?  What do we do differently?  And I would strongly recommend a paper written by Griffith Sedel, it was written in the Journal of Anaesthesia in 2015.  It was a collaboration between the British Orthopaedic Association, The Anaesthetic Society and the Geriatric Society of the United Kingdome and they made recommendations for the surgeons and the anaesthetist.

When we approach the femoral canal, the first thing we should do is put a sucker down the canal and lavage aggressively.  We want to really wash out all the fat and all the debris because that is the material that gets embolised into the blood and causes the reaction.  When you are going to cement you tell the anaesthetist and the anaesthetist will draw up a vasopressor, that will bring the blood pressure back up.  In a primary hip we do not high blood pressure, in a fracture we want the blood pressure quite close to what it was pre-operatively.  We then put our cement in very late.  Again we are not trying to get a 25 year hip here, we are trying to get a patient alive and mobile and so if you put the cement in late there is much less residual monomer which means there is much less likelihood of bone cement implantation syndrome.  You then put your stem in early and slowly so you do not see that big push of debris into the circulation.

The anaesthetist has a role, they have to keep the patient well hydrated and they have to maintain the blood pressure and as I said they have to have a vasopressor in a syringe ready to go if anything happens when you are cementing.

You do not need the perfect x-ray. A white out is probably a bad thing in a hip fracture, it is okay to see a radiolucent line, it is okay to not have the perfect cement mantle, it is much more important to have a mobile live patient who is going to go on and have another 10 or 15 years of quality life.

So what is the standard of care in fractures?

If you meet the standards of care we are going to see a significant increase in the survivorship for both revision and mortality and I thank you very much for your attention. 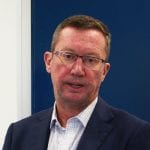 As well as running a clinical practice Professor Crawford has a chair of orthopaedic research at the Queensland University of Technology. In this role he supervises PhD students, a number of post-doctoral researchers and collaborates closely with experts in the field of tissue engineering, cartilage degradation, cartilage mechanics, and clinical orthopaedics. The research in the outcomes of surgery performed under Professor Crawford’s care is an important part of his research practice.